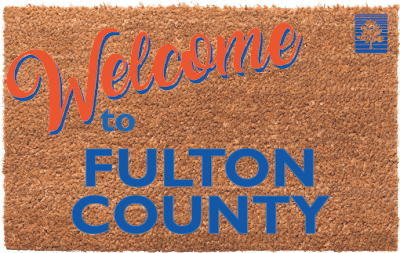 Fulton County added 17,200 new residents in the past year, tops in the 10-county Atlanta region, according to population estimates released today by the Atlanta Regional Commission. The growth brings the county’s total population to 1,020,000.
“Fulton County is a leader for our region in many ways, including population growth,” said Chairman Robb Pitts. “With more than a million residents, Fulton County has a greater population than six U.S. States and represents 10% of the population of Georgia.”

Long the largest county in metro Atlanta, Fulton is the only county with a population over 1 million. Fulton’s growth has gathered strength in recent years. The county grew by 17,100 people between April 2016 and April 2017 and added 15,300 the previous year. Fulton has added more than 99,000 people since 2010.

Overall, the 10-county Atlanta region added 75,800 people in the past year, the second-largest increase since the Great Recession ended in 2010. The region’s growth was down slightly from a year earlier, when population increased by 78,300. The Atlanta region is now home to 4,555,900 people, more than that of 25 states.

Jobs growth fueled the region’s population boom. The 29-county metropolitan statistical area (MSA), as defined by the U.S. Census Bureau, added more than 41,000 jobs between April 2017 and April 2018, ranking 9th in the nation.

“The Atlanta region had strong growth over the last few years as we emerged from the Great Recession,” said Mike Carnathan, manager of ARC’s Research & Analytics Group. “People are moving here because jobs are plentiful and because metro Atlanta offers a great quality of life.”

Each of the Atlanta region’s 10 core counties experienced population growth during the past year. Gwinnett County, the second-largest county in the region, added 16,700, and DeKalb County added 10,630.

“ARC’s annual population estimates are a great tool to help local governments plan for the future and focus the region’s attention on key issues critical to our quality of life, like housing affordability and transportation,” said Kerry Armstrong, ARC Board Chair.
For more details about ARC’s population estimates, check out ARC’s latestRegional Snapshot.


Posted by Fulton County Government at 1:32 PM No comments:

Certified health insurance navigators will be onsite at Fulton County’s Adamsville and Neighborhood Union health centers to guide residents through the health care market place. The navigators can help Fulton County residents apply for financial assistance, compare health plans, and sign up for insurance.  This includes enrollment help with the federally-mandated Affordable Care Act (ACA), also known as Obamacare, which is for people who are uninsured or those who work part-time or are self-employed and do not have insurance.  For those who sign up by December 15th, coverage will begin on January 1, 2017.  To qualify for insurance under the ACA, you must be a resident of Georgia and a U.S. citizen or a U.S. naturalized citizen.

Walk-in appointments will be available as follows:

The navigators can also assist income-eligible persons with signing up for Georgia Medicaid and Georgia PeachCare for Kids.  Navigators provide unbiased guidance on the health insurance options available on the insurance market exchange.  This is a FREE service that is funded by the U.S. Department of Health & Human Services.                    ###
Posted by Fulton County Health and Wellness Champion at 9:20 AM 1 comment:

The Fulton County Board of Health is observing World AIDS Day on Friday, December 1st by offering  HIV health education and FREE HIV testing and counseling .

This World AIDS Day event is free and open to the public and features: 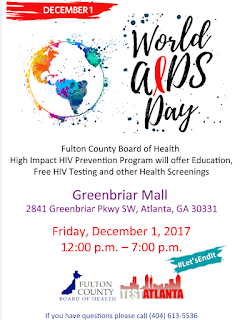 Posted by Fulton County Health and Wellness Champion at 1:25 PM No comments:

Fulton County will open 18 Early Voting sites for eligible residents to cast their ballot in the Municipal General and Special Runoff Elections. The 18 locations will be open Monday, November 27 through Friday, December 1st, 2017 from 8:30 am – 7:00 pm.

“Due to the holidays, we can only offer one week of early voting for these runoff elections,” stated Richard Barron, Director of Registration and Elections. “We encourage residents to verify their eligibility to vote in this runoff before heading to the polls.” 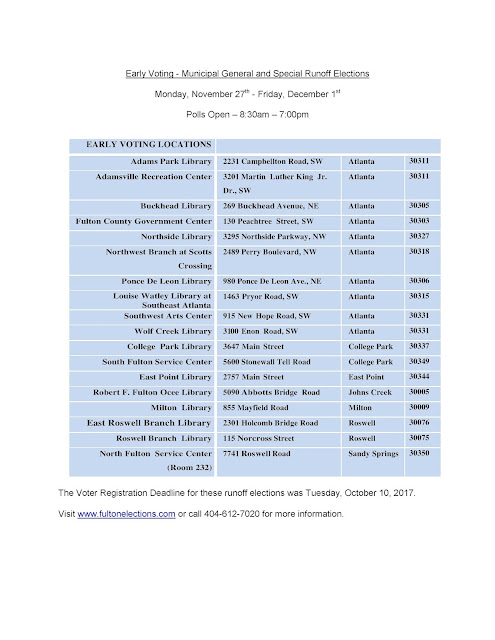 Posted by Fulton County Government at 12:58 PM No comments:

Once people were able to smoke on airplanes, in schools, restaurants, even hospitals, just about everywhere we went.  Not anymore.  The Great American Smokeout, started nationally in 1977 by the American Cancer Society, has helped flip American attitudes about smoking.  Fulton County has outlawed smoking in its buildings and facilities, and most public places and work environments around the country are now smoke-free.
“Smoking is the leading cause of preventable death and disability in the U.S.”
That’s according to the U. S. Centers for Disease Control and Prevention which also points out U. S. smoking rates have dropped from 42% in 1965 to 15% in 2015.  In Georgia, about 21% of adults still smoke cigarettes.  The percentage of smokers in Fulton County is lower than the state and national averages—13%, or 13 of 100 persons uses tobacco.   Health officials say what’s alarming is the increase in the use of electronic or E-cigarettes, hookah pipe and cigar smoking among young people.
Our program, Freedom From Smoking®, is based on science.
The BOH’s Health Promotion Department has just completed its pilot Freedom From Smoking® program created by the American Lung Association.  This “evidence-based” program has helped hundreds of thousands of smokers to “give it up” over the last 37 years. All of the experts say the best way to quit tobacco is with support, and that’s exactly what the program offers—support and guidance. 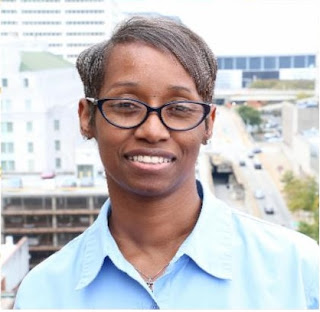 Tracie Baugh is this week's Service Legend because of her high level of professionalism, along with her kind and loving spirit.  Tracie is a Customer Service representative in the County Manager's Office of Customer Service. Here's her story.

A caller contacted the Office of Customer Service and was desperate to get information about a Fulton County event.  The caller paid for and was excited about attending the activity; However, the caller had not received information about the location and time of the event.  The caller said, in today's fast paced, computer connected world it seems like people miss the importance of human interaction, For that reason, Tracie Baugh was a breath of fresh air.

The customer said, "Tracie worked fast, efficiently and was clear in her communication.  She understood my situation and really worked hard to help.
I really appreciate her and I thought Fulton County leadership might like to know."

Tracie Baugh is this week's Service Legend who believes in and exemplifies the County's customer service slogan - "BECAUSE WE CARE, WE SERVE".

Fulton County continues its work toward making the County 1st in Impact, Service and Efficiency.

Providing quality customer service is a part of the County's strategic plan and employees are key contributors when it comes to accomplishing this goal.

Leadership recognizes employees are the first point of contact when it comes to service delivery.  In an effort to say "Thank You" for their exemplary service, this publication highlights employees who have delivered excellent customer service throughout their tenure with Fulton County. 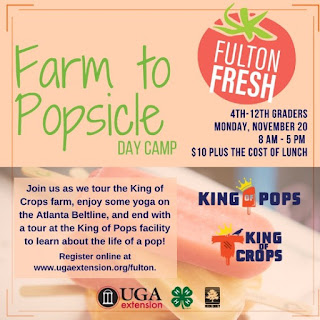 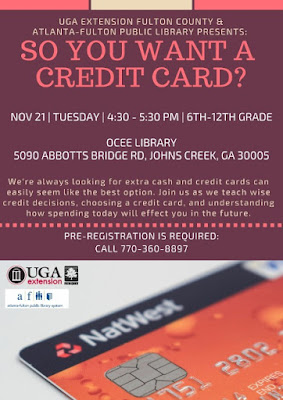 Posted by Fulton County Government at 10:33 AM No comments:

During National Breast Cancer Awareness Month, the Fulton County Board of Health wants to remind women who live in Fulton County to get their life-saving cancer screenings available year round at its Adamsville, College Park and North Fulton regional health centers. 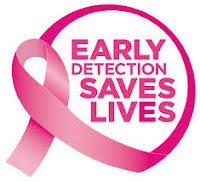 Breast cancer is still the second leading cause of cancer deaths for women in the United States and in Georgia, according to the Centers for Disease Control and Prevention.  The CDC says early detection – through health screenings—can lower the death rate of breast and cervical cancers.  The CDC recommends more women should utilize these life-saving, preventive screenings.

Through Fulton County’s Breast and Cervical Cancer Program (BCCP), women who are income-eligible can receive FREE or low-cost breast and cervical screenings and other diagnostic services.  The program will cover the cost of a mammogram to uninsured Fulton residents who meet the program criteria.  To qualify for Fulton County’s BCCP program, a woman must:

Fulton County’s BCCP program has enrolled more than 10,000 uninsured women between 1995-2015 who received screenings and or diagnostic mammograms.  Fulton County partners with many civic organizations.  This includes providing clinical breast examinations and mammogram referrals to the S.C.L.C. Women’s Organizational Movement for Equality Now, Inc. since 2008. For more information about cancer screenings and other women’s health services, call the Fulton County Board of Health’s Women’s Health Division at 404-612-1649.
Posted by Fulton County Health and Wellness Champion at 9:41 AM No comments:

Fulton County Board of Health Readies for ZIKA Mosquito Season 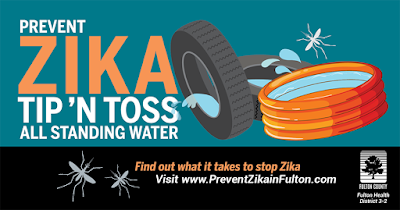 The Fulton County Board of Health has launched an expanded and coordinated public awareness campaign to prevent any  local transmission of mosquito-borne viruses, especially Zika, from taking hold in metro Atlanta this summer.

According to the CDC, one of the most effective ways of preventing the spread of the Zika virus is to control the mosquito population by eliminating standing water where mosquitoes breed.

Fulton County Board of Health officials strongly advise area residents to actively check around their homes and apartments and Tip ‘n Toss all standing water in flower pots, planters, children’s toys and outdoor furniture,  especially after every rainfall.

Residents are also advised to clean out gutters, remove piles of leaves and keep vegetation cut low to prevent landing sites for adult mosquitoes to breed. These Tip ‘n Toss efforts will dramatically reduce the chances of local transmission in Fulton County.

To date, there has been NO local transmission of the Zika virus in Georgia.  However, according to the CDC, there have been two confirmed travel-related cases in 2017 in Fulton County—both cases occurred during travel to countries where the virus is active.

For more information, check out www.preventzikainfulton.com for prevention information and updates. Residents can call the Mosquito Hotline at 404-613-1303 to report issues with standing water.